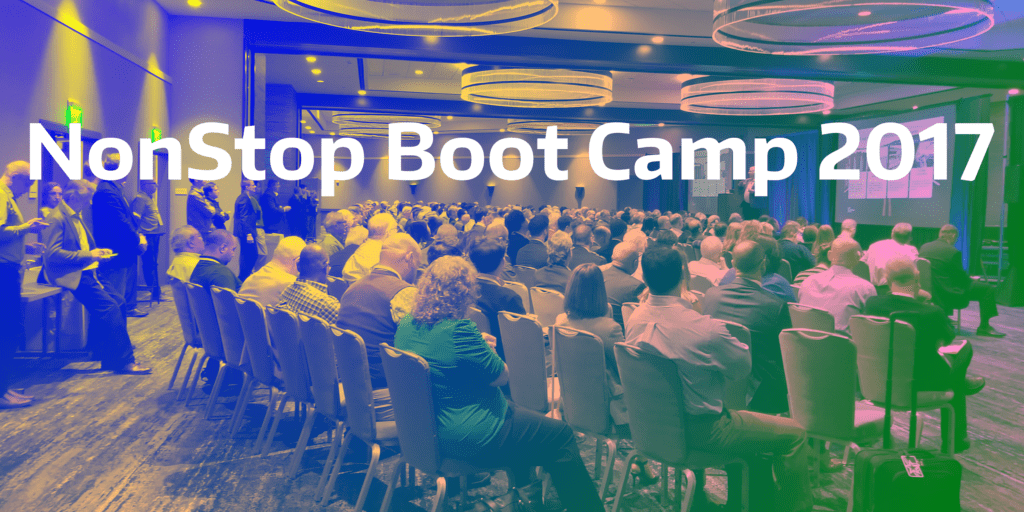 As 2017 wraps up, there were only a few more trade shows left on the schedule and this one is the biggie. This year’s NonStop Technical Boot Camp moved from our familiar home at the Fairmont in San Jose up the Peninsula to a new location at the Hyatt Regency in Burlingame. This multi-day event is the NonStop community’s largest trade show, with nearly 500 attendees and 40 vendors. According to sources, this year’s customer attendance was up by nearly 40%.
XYPRO had a lot to be proud of this past year. Our booth featured XYPRO’s award from INC Magazine’s 100 Best Workplaces. It was also the first time Merlon Software exhibited under the XYPRO corporate brand. XYPRO acquired Merlon Software in early 2017.

The value started even before the conference officially opened – XYPRO’s investment in the future of NonStop talent benefitted from the HPE NonStop education sessions offered on Saturday and Sunday as we sent our Junior NonStop Development & Support Teams to take advantage of this education opportunity.

Pre-Con Seminars
XYPRO participated in the Sunday Seminars again this year and we were proud to offer extremely useful and practical education sessions on the topics of Tuning NonStop SQL Queries and meeting the newest PCI-DSS 3.2 requirement for Multi-Factor Authentication on the NonStop server using XYGATE User Authentication™ (XUA), which is shipped with every HPE NonStop server.
Here’s a recap of some of the interesting sessions and key takeaways from this year’s show.

The Best Investment we ever made in NonStop Security 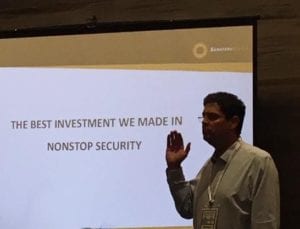 BankServAfrica is Africa’s largest automated clearing house, processing close to three billion interbank payment transactions valued at ZAR 8 trillion annually (USD$ 570 Billion). It is critical for them to ensure secure and reliable payment mechanisms. BankservAfrica is required to comply with International Banking Best Practice and Standards as set by the Bank of International Settlements; ISO, PCI-DSS Central Banks and Payment Associations.
Hamman Ferreira, CIO of BankservAfrica presented to a standing room only audience. In this session, he discussed their need for risk reduction and compliance and how the XYGATE suite of products from XYPRO addressed their needs. The key objective for BankservAfrica’s implementation was to ensure the safety and functionality of a security measure system through which Administrators, Developers and Testers can connect to any server in BankservAfrica. They also had requirements to track, alert and review all activity on the HPE NonStop server. The XYGATE suite was the solution chosen for this project.
Mr. Ferreira described the installation process this way: “the setup was quick and could all be done in one day”. XYGATE Access Control (XAC) provided individual accountability and eliminated the need for shared user IDs. XYGATE Merged Audit (XMA) provided a single repository for all security event data on their systems. XYGATE Report Manager™ (XRM) and XYGATE Compliance PRO™ (XSW) allowed them to generate activity and compliance reports on the fly with a single click. This powerful combination of functionality, simple setup and ease of use of the applications, as Hamman put it, is “The Best Investment we ever made in NonStop Security”. 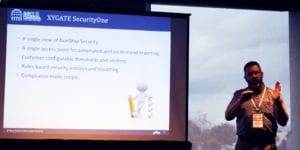 Security intelligence and analytics are no longer buzz words. These are solutions that can minimize the impacts of a breach by identifying it in its early stages. Kelvin Anderson of Navy Federal Credit Union discussed NFCU’s experience working with XYPRO’s newest security offering, XYGATE SecurityOne® (XS1). XS1 is a security intelligence and analytics platform for the HPE NonStop server. At Navy Federal, the need for proactive, real-time monitoring using a single console and getting visibility into activity trends was a long standing requirement. Kelvin described how, working closely with XYPRO, Navy Federal Credit Union was able to quickly deploy XS1 in their environment and immediately get visibility to anomalous activity. He described multiple use cases that without XS1, would have nearly been impossible to identify and stop. SecurityOne uses NonStop specific indicators of compromise to detect incident patterns before they result in a breach.

Case Study: How a Credit Card Company Strengthened NonStop Security
Delivered by Chinami Higashibata of DXC Technology, this case study described how credit card companies in Japan have strengthened their security and improved their overall compliance, mainly for the VENUS card system. The VENUS system provides operations and management of billing for cardholders and franchise information for the “VIEW Card”. Credit card usage in Japan has been increasing year over year at a healthy pace. In 2016 alone, transaction volume country-wide increased by nearly 10%. With the 2020 Olympics being held in Tokyo, this volume is anticipated to skyrocket, along with the concomitant risks of data breaches and credit card fraud, and requirements for increased processing power and system performance. Compliance with security standards, such as PCI-DSS are critical.
Using a combination of XYGATE Access Control (XAC), XYGATE User Authentication (XUA) and XYGATE Object Security™ (XOS), Higashibata-san detailed how the XYGATE suite was used to achieve PCI-DSS compliance.
From a database performance perspective, Merlon Auto Reload Software (MARS) from Merlon Software was used to ensure database operations continued to work in a high availability, high performance model. The automation of database reloads using MARS reduced manual overhead and error prone user activity, which also reduced costs and business risk.

SQLXpress and MARS News
HPE announced the addition of Merlon SQLXPress and MARS to the HPE pricebook. This allows NonStop customers to purchase and get support for these two products directly from HPE, the same as they would any other HPE product. SQLXPress is a Windows based browser-like interface to NonStop SQL with support for both SQL/MX and SQL/MP. MARS is an impressively easy to use utility for maintaining database performance and health.

A Successful Show
The 2017 version of NonStop Technical Boot Camp had lots of great seminars and workshops for those new to the business as well as industry veterans. It was a great way to end 2017. The feeling all around was that the show was a success. The new venue was a change and it worked out. It was centrally located, the food was fantastic and the views of the San Francisco Bay were breathtaking. There were a lot of creative ideas for the industry and the future looks bright.
Finally, a couple of short notes of appreciation from the XYPRO team. First, a huge thank you to the Connect team for organizing another extremely valuable event; we recognize how hard you work to make these events a success. And, of course, thank you to all the customers and vendors involved, as well as to the HPE staff who dedicated so much of their time to pull the schedule and content together. It was a blast.